The Union of Man and Plane

As a photographer, I never stop learning. This is especially true of air-to-air photography.  I’m always amazed at how nonchalant some photographers are about air-to-air photo shoots. Not me.  I’m all business, because it’s a deadly serious business.  I have a responsibility to make sure everyone and everything gets back on the ground safely.  To that end, you’d think something as simple as your camera’s strap would be considered a safety item. Well, it is, but not the way you’d think.

Of course a camera strap is an important item for an air-to-air. If you happen to drop the camera, it’s nice to know it’s only going as far as the strap will allow and not fall several thousand feet to Mother Earth. More importantly, it’s not going to hit some unsuspecting soul down below. It won’t be plummeting through some home owner’s roof like some sort of man-made meteorite.  I can hear that conversation now. “Hey honey, did you hear something? I think the squirrels are back in the attic!”   It’s not going to hit and damage the plane you’re photographing from nor the planes you are photographing. I’ve seen what bird strikes can do to a plane, I don’t want to be the guy responsible for the first mid-air camera strike! 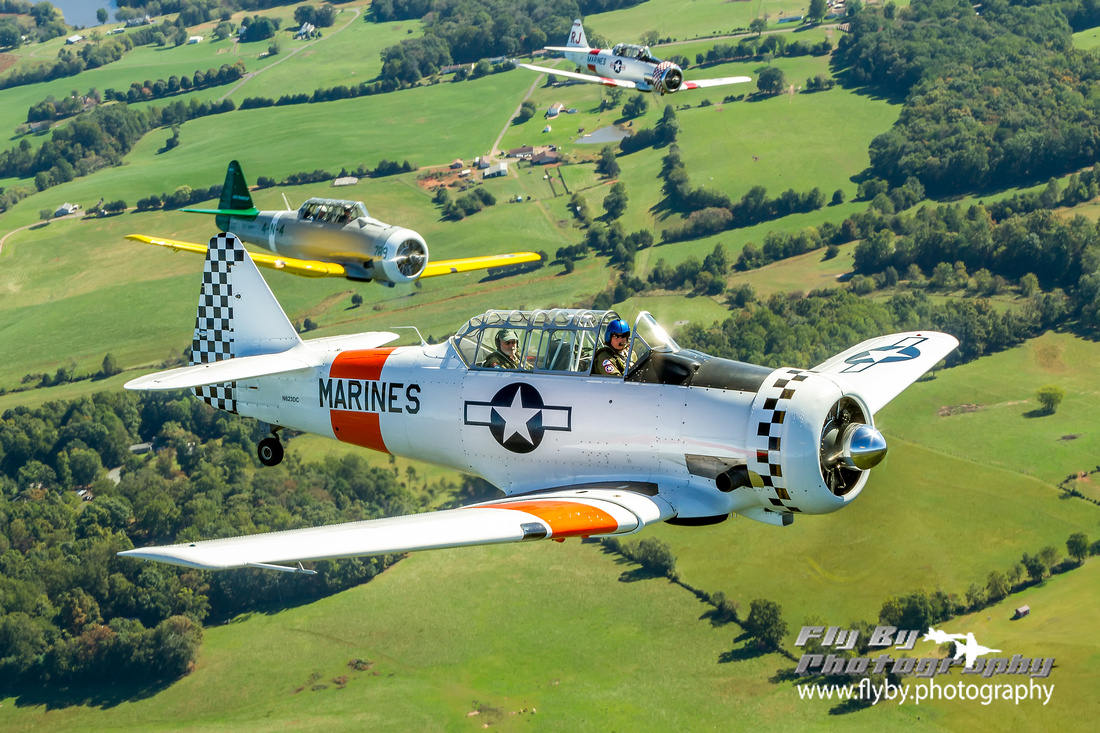 With Gold 2 on our wing, Gold 3 and 4 slide into their positions.

So I’m in the back of a T-6 Texan on a formation training flight. We are the lead for Gold Flight, a flight of four T-6s. Now, this isn’t a true air-to-air session since I’m basically along for the ride getting whatever photos I can with absolutely no say in the what, when and where.  I’m back there strapped firmly into a parachute, which doubles as my seat cushion.  On top of that I’ve got a five-point harness holding me in my seat.  My camera is attached to a Black Rapid RS-7 strap which sits across my right shoulder, passes under my left arm and puts the camera in front of me. My camera is safe; it’s not going anywhere.  The camera and I are now one with the plane.

As we work through various formation changes my aircraft, Gold Lead moves to the Gold 3 position. Our group of four T-6 Texans moves into a trail formation.  In a trail formation, each plane is stacked down and behind the plane ahead of it. We are number three in the trail, so there are two aircraft ahead of and stacked over us. Looking up at the aircraft ahead of us I think, that could make a cool photo. I’m pretty sure my lens is too big to get the shot I want, but I’m willing to give it a try. I’ve had my canopy open only half way up until now. Half way open was enough to shoot the other aircraft when we were in other formations, yet it kept a great deal of the wind blast and buffet off of me making it easy to keep the camera steady.  I know with the canopy half open, that it will be showing in my photo. That’s not going to make for a good photo. I’m going to have to open the canopy all the way and deal with the hurricane force breeze. I slid the canopy all the way open and in came the blast of air. Damn, I’m going to have to up my shutter speed, there’s no way I’m going to be able to keep the camera steady enough at the low shutter speed I’m at to get a sharp shot. I roll the shutter speed up and put the camera to my eye. As I did, I could feel the strap being lifted off of my shoulder, in the rush of air. I didn’t give it much thought and went about trying to get a photo.  Unfortunately, my lens did have too much zoom and I wasn’t seeing the shot I wanted, but what the Hell, I squeezed off a high speed burst that got me five photos of the underside of the tail of the plane ahead of us. That’s going to look like crap, I thought. Oh well, I gave it a shot and it didn’t work. You live and learn. 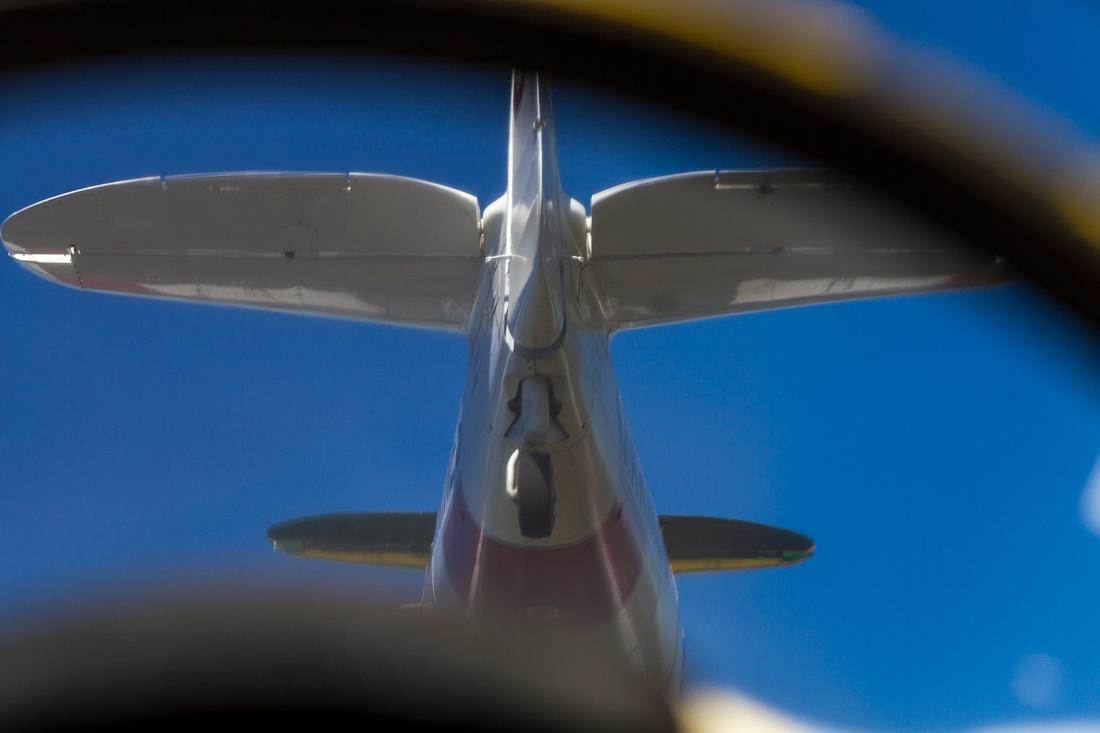 One of the five photos I managed to get in the trail formation. This wasn't the photo I had in mind.

I pulled the camera away from my face, which as it turned out wasn’t very far! Oh shit! I was able to get the camera maybe six inches from my face, instead of down in my lap where I had been keeping it when not photographing.  This is the part when time seems to come to a standstill.  Now, my mind seems to kick in to overdrive. I’m holding the camera off my face, now what?  I can feel that the strap is no longer on my shoulder. Great, where is it?  I try gently tugging against my camera. No luck, it’s not going any further.  When I strapped into the plane, I thought I was one with the plane. This little predicament brought oneness to a whole new level!  This isn’t fun anymore! I don’t want to have to continue the flight like this.  Even more, I really don’t want to land like this and have my pilot find me sitting in his backseat holding the camera off my face, needing his help to get unstuck from whatever it is I’m stuck on. I’m sure he’d call everyone at the airport over to come have a look, before releasing me, too!  Hell, I do that to him, if our roles were reversed!  I’d even get pictures to post on Facebook if he were trapped back there with a camera against his face!

What if I bring the camera back up to my face?  Would that release me? It might work or it might make things worse. It’s bad enough right now; I don’t want the camera to be hard against my face for the rest of the flight! What if the camera slips down and ends up tightening around my neck? Yeah, that thought really did run through my mind!  I could be strangled by my own camera!  That would be quite the headline in the newspaper:  “Man Strangled by Camera Strap in Flight.” Not cool.

The strap! I felt it go slack, come off my shoulder and flutter in the breeze when I lifted the camera toward my face to take the photos!  It must be caught on something behind me.  I had tried gently tugging on it and it didn’t budge. I could try giving it a good jerk to see if that will remove it from whatever it’s caught on!  But, it’s not my plane and I don’t want to break anything, especially something that could potentially, put my plane and the other planes around us in danger!  Four planes dropping out of the sky would be just a little bit worse than my being a laughing stock back at the airport! No, brute force isn’t the answer here.

Once again, the thought of bringing my camera closer to my face really did seem to be the way to go.  Oh yeah, this strap is held to the bottom of the camera with spring loaded clip! If things get worse, I can release that clip. Why didn’t I think of that sooner? With my left hand I lift the camera back toward my face. I feel the strap once again fluttering in the slipstream. With my right hand I grab the strap and slide it rearward along the strap and gently pull outward and upward.  Success, I’m free!  I’ve saved face, both literally and figuratively!

So what’s the take away here?  Firstly, this whole incident probably didn’t last more than fifteen seconds. Despite my mind running through possible solutions and outcomes and some of those outcomes being bad, I never panicked.  Next, I’ll never wear a neck strap on another air-to-air; I’ll be using a wrist strap from now on.  Lesson learned!

Everyone SmileOk, now everyone smile for your close up. Formation training over Virginia.

Everyone Smile! Gold 2, 3 and 4 in a left echelon formation on my wing.