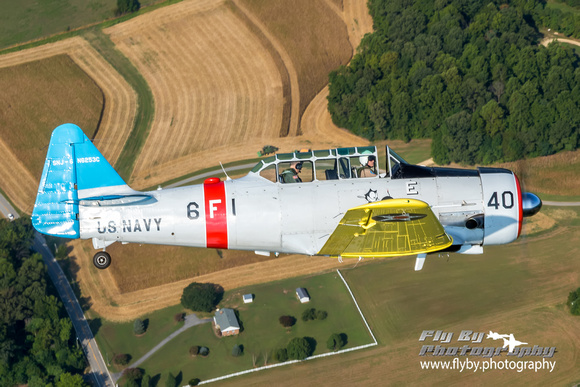 Looking down on T-6G Texan, N6253C, as we exit our hold and push toward Arlington National Cemetery.

This Texan, N6253C, despite her current pre-World War II Navy paint scheme, never served with the Navy. Originally built by North American Aviation in Dallas, Texas as an AT-6C, she assigned to the United States Army Air Forces and given the USAAF serial number 42-4125. The USAAF assigned 42-4125 to 318th Army Air Forces Flying Training Detachment (AAFFTD) at Avenger Field in Sweetwater, Texas. The 318th AAFFTD was the unit that trained the 1, 074 women pilots that served as Women Air Service Pilots(WASP). After completing their training, the WASPs took on flight related duties so that male pilots could be freed up for combat duty. In the late '40s AT-6C 42-4125 was sent to North American Aviation's Downey California plant to be remanufactured to T-6G standard. Completed in May 1950 and returned to the now US Air Force, she was given USAF serial number 49-2943. She was eventually surplused by the Air Force and shows up on the civilian registry in 1963. It is believed that this is the only currently flyable T-6 Texan with WASP history.